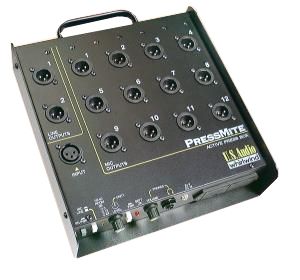 Election cycles are getting longer and longer and campaigns are on the road for extended periods of time while cable and Internet news outlets hunger for content to fill their 24-hour news formats. This has resulted in an increased demand for sound companies and AV rental houses to provide press conference feeds. If you do not have at least one press mult in your inventory, you may be missing out on increased revenue opportunities.A

Menu For Feeding the Press

At a minimum, you need a passive multiple channel distribution box or panel. Because you never know where or when you will need to set-up a press conference, one important design concern is its ability to keep RF and other hums and buzzes from getting into the feeds. It’s not unusual to be asked to provide feeds at an airport, government facility, arena, banquet hall, school, etc. and in many cases, your gear may be subjected to increased levels of radio traffic from police, security, and other general event radio communications.The ability to resist RF is improved by utilizing high-quality transformers between the input and each output. Transformers increase the Common Mode Rejection (CMR) of your feeds and although they don’t come cheap, a well-designed mult will have them.

Another consideration is, “How many channels?” Off the shelf commercially produced passive press boxes are available in configurations of 6 channels and up.Probably the most important issue for a press mult is that it be designed to have a high degree of isolation between outputs. You never know WHO is going to plug WHAT into your press mult and you’ll want to avoid someone injecting noise or killing your feed at the last minute or worse, DURING the press conference. Even if someone dead shorts one of the outputs, it must have a negligible effect on all of the others. However, even when designed with a high degree of isolation, it is not impossible for someone to get enough noise into your press mult for it to bleed over to the other outputs. If and when that happens, monitor one of the outputs and plug the feeds in one at a time until you find the culprit.
Passive Press Units, Line Gets You MicMost passive press mults utilize transformer coupling and resistive pad circuits to attain improved CMR and isolation. This usually results in at least a 40 dB drop in level from input to output and requires that you feed 12-output Passive Press Multa strong line level signal into the press mult to get a usable mic level signal out. Most members of TV and radio crews and media reporters are experienced with this situation and are equipped to accept mic level signal into their gear.

FYI - it’s not uncommon for someone to see an XLR input on a press mult and stick a mic in it expecting it to work. This results in extremely low or no output level. Remember, with passive press mults, you need to provide a line level signal from a mixer or other separate mic preamplifier to get mic level out.

Active Press Units - Go Anywhere Under Your Own Power

An active press mult is really a Distribution Amplifier (DA) with specialized features geared toward press conferencing. It has the advantage of being entirely self contained and should operate on AC or battery power. A basic unit will have a single mic input, severalmic outputs and one or two line outputs for attaching passive press mult boxes as expanders. It will usually have an input level control with signal/clip LEDs, phantom power
select and headphone monitor.More elaborate units might have dual redundant mic inputs, a tone generator, signal meters, outputs that are selectable for mic or line and automatic power switching – that is, if AC fails, the unit will switch seamlessly to battery backup. When the outputs are mic/line selectable, each user has the choice of receiving mic or line signal or outputs can be set to line level to be used for attaching passive expanders.

Procedures and What To ExpectYou will of course need to locate your press mult (and mixer if necessary) in a location that is accessible to those plugging in, usually at or near the podium. It helps if that’s an open area nearby that gives convenient access for the press.

Often, the press will use wireless “cubes” like the Lectrosonics plug-in transmitters. If possible, locate the press mult where it gives good coverage to the press area and avoids obstructions and obvious sources of RF interference. These transmitters also use up more area around them than standard XLR connectors so make sure that your press mult’s connectors are spaced far enough apart to accommodate these popular units side by side.Once you’re set up, send tone to the press mult at +4 dB. This will output a usable mic level signal on your press mult and the press can adjust their devices accordingly. Although most of the press folks are old hands at this and carry adapters to go from balanced XLRs into whatever device they have, be prepared. You will inevitably encounter someone that is new to this or forgot cables or adapters and will come to you for help, so keep a black bag of various adapters and cables handy.

Custom InstallsRemember that you are not always limited to providing or encountering off the shelf units. Some government buildings, public utilities, airports, etc. utilize large format systems as permanent installs with or without ancillary portable units. Some buildings might even have a press system built into the outside wall. Kept behind lockable doors, it’s always ready when a conference is held outside “on the steps”. Feeds are then readily available not only to reporters, but also to broadcast trucks parked on the street.

Get The NewsDon’t miss out! The ability to provide press feeds can seal the deal when you are into political or corporate sound work or if you want to realize an additional source of rental income. Keep a press mult handy . . . you never know when the next President might stop by!

Al Keltz is General Manager of Whirlwind. Reach him at alk@whirlwindusa.com

How they work and the difference between them. By Al Keltz

A Direct Box can be in-DI-spensible

What direct boxes (DIs) do and what are the different types. By Al Keltz
Next
1 / 3
Next