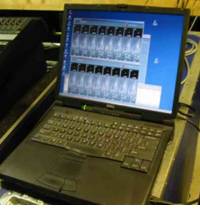 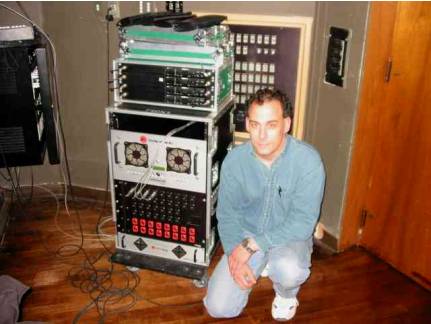 Little did Alexander Graham Bell realize that his invention for transmitting speech over a copper wire in 1876 would dominate the communications industry for the next 100 years. Eventually, this basic invention would result in millions of miles of copper wire being strung around the world, with the cumulative effect being nearly instant communication between any two spots on earth. The pro sound industry was born soon after this, when communicating to more than a few hundred people in a room became necessary. Since then, pro-sound has been borrowing telephone technology, with everything from decibels to VU meters and quarter-inch phone plugs all coming directly from Bell Labs. Dale Hourlland of the Weis Center for the Performing Arts at Bucknell University in Lewisburg, Penn, with the Whirlwind E Snake rack.

Copper wire can be an efficient way to carry audio information, but all that cable running around everywhere at a music concert is not without its cost. First of all, it's REALLY HEAVY , as any sound crew that has to drag around a 250-foot, 48-channel snake will attest. Secondly, that much copper wire stretched out hundreds of feet acts just like, well, a really big antenna, tuning in to every stray bit of electromagnetic interference including light dimmers, police radios, and power line hum. Plus, copper wires interconnected between different points in a building promote ground loops, those insidious currents that cause all sorts of hums and buzzes in any sound system plugged into more than one electrical power source. All this makes for a heavy, expensive, and complicated audio distribution system that's central of any sound system in terms of weight and deployment time, and second only to the mixing console as to limiting the number of inputs and the size of gig you can do.

If only we could use some of the latest digital technology to replace the individual copper wires with a single data stream? With all the computer communication around us, it would seem like we could just plug in an Ethernet connection and start singing over a CAT-5 cable. After all, bits are bits, and a single digital copper or optical connection of sufficient bandwidth should he able to carry plenty of audio channels and he turned into a big audio snake, right?

THE SNAKE BITES BACK

Well, audio communication is a little more complicated than simply sending data files to a computer hard drive, the biggest issue being lack of time. Yes, in the audio world, we just can't wait more than a few milliseconds for sound to arrive before things get out of sync. Try talking on headphones with even a 30-millisecond delay to get the idea of how hard this would be for a band to play together with any appreciable delay. So a traditional computer data infrastructure isn't good enough to become our audio snake.

Enter CobraNet, a method that combines inexpensive Ethernet components such as RJ-45 connectors, CAT-5 cables, and 802.3 switches with a special data topology computers running E Snake Control software at various locations act as remote control for all patching. That allows the sending of dozens of audio channels down a long thin wire without noticeable delay. And one of the latest implementations of CobraNet is brought to you by the same company that has made perhaps more traditional copper snakes than anyone else in the world, Whirlwind.

Known as the Whirlwind E Snake, this digital communication system simply blows the lid off what you can do with a 48-channel snake in terms of distance, performance, and cost. Yes, I said cost . . . digital snakes aren't just for the rich and famous anymore.

Here's what I found on a recent visit to Bucknell University in Lewisburg, Pennsylvania.

I met with Dale Hourlland, technical director at the Weis Center for the Performing Arts about their experience with Whirlwind digital snakes and Yamaha consoles. They didn't start out as happy digital campers, having originally installed a competitor's digital system that was fraught with downtime and lack of technical support.

But once they converted to the new system, it was smooth sailing.

Hourlland and his crew are responsible for between 100 and 150 shows per year including events ranging from graduation ceremonies to visiting artists such as Wynton Marsalis.

The center currently uses a Whirlwind digital snake (with the snake frame set up for 32-inputs and 16-returns) and three Yamaha PM5D consoles via three MY16-C interface cards (with 16 digital inputs per card) in each console. One PMSD console is dedicated for front of house, a second PM5D is used for monitors, while a third PM5D acts as a floater which can be tied in for remote recording if desired.

The E Snake frame (ESF) is in a portable rack directly off stage left and functions as a stage box. All XLR cables are direct-run to the rack instead of MASS fanouts due to the wide configuration of shows they host, and according to Hourlland, fan noise from the ESF rack is not an issue as the residual noise is very low and not a problem even when mixing symphonic events.

In addition, every possible location for the stage box and mixing consoles has a RJ-45 CAT-5 connection that is tied hack to the campus computer room via CobraNet topology. Since the entire campus is connected together via fiber, the normal 328-foot (100-meter) limit of twisted copper CAT-5 doesn't apply, and connections of several thousand feet between stage and consoles are possible.

The beauty of having the laptop right next to the mixing console is that all gain and phantom power functions, as well as digital patching, can be instantly stored or recalled as desired from the FOH or Monitor positions. Plus the laptop acts like a control gateway, with the gain knobs on the PM5D seamlessly controlling preamp gain down at the stage, even if that stage (and the stage box) is clear across campus.

Hourlland is also ebullient about how quiet the tnic pres on the E Snake are, and cites that positive comments from touring engineers on the high audio quality have increased dramatically since the system went online.

Of course, if you have a favorite preamp in your rack you could integrate it into the front end of the E Snake, hut you would give up the remote control of that preamp, unless it specifically was designed for that function. As such, the on-board E Snake preamps seem fine for all but thc most critical recordings.

Because CobraNet uses standard RJ45 connectors and basic Ethernet protocol (albeit a proprietary data structure) off-the-shelf components can be used to extend or even split the signal to multiple consoles. That means a simple $50 CAT-5 Ethernet switch from Best-Buy can now function like an expensive console split, and route up to 64-channels of 20-bit audio in each direction to as many other consoles as you like. So you can run separate FOH, Monitor, Broadcast, and recording consoles at multiple locations with perfect isolation and zero cross-talk. And since CAT-5 wire is cheap and installable by local computer companies, you can put audio drops anywhere around your venue and leave them in place for that special once-a-year event when you need to move the FOH  console to the other side of the room, or perhaps send a matrix mix to another room across campus. It's just data bits and patch cables at that point so any computer tech can help you route the signal around with a standard RJ-45 patch-bay. Talk about simple. I have seen the future, and it's running on a long, thin wire.

Mike Sokol has been a live and recording sound engineer for 35 years and resides in Western Maryland with the wife, three boys and four cats. In addition to technical writing, Mike also teaches the How-to Sound workshops around the country. See www.howtosound.com for a schedule. For more information and to download an operational version of E Snake, E Desk and E Mod Software, go to http://whirlwindusa.com/catalog/digital-audio-networking/digital-snakes/e-snake-frame-esf

How they work and the difference between them. By Al Keltz

A Direct Box can be in-DI-spensible

What direct boxes (DIs) do and what are the different types. By Al Keltz
Next
1 / 3
Next